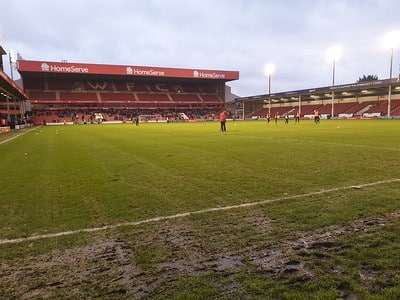 The football season may be on hold due to the ongoing coronavirus outbreak. However, that hasn’t stopped staff and players at Walsall Football Club raising awareness of mental health during these tough times.

Reduced physical contact and physical distancing guidelines have resulted in the players having to train individually. Despite the challenging circumstances, staff and players at the Saddlers have kept in touch through regular group chats and video calls to discuss any concerns.

One footballer participating in the Saddlers group chats is club captain James Clarke, who is currently taking a Mental Health Awareness course organised by the Professional Footballers’ Association (PFA).

In an interview with BHSF, Clarke revealed how the course has given him a new perspective on mental health.

“The PFA run educational courses and recently sent through a list of courses with one of them being Mental Health Awareness. It was something that caught my eye straight away. The issue of mental health has been brought to light, and rightly so, over the last couple of years with more people aware of it.

“I’m really enjoying the course and will be submitting assessments. You don’t have to be mentally strong to play football but if you have it in your armoury, it can be a massive part of your game.

“By taking on the course, it has helped me to learn more about mental health and understand some of the feelings I have as a footballer.”

Marc Czuczman, Walsall’s lead physiotherapist, feels the impact mental health could have on a person’s wellbeing can sometimes be underestimated. Czuczman also takes pride in encouraging staff and players to speak to him any time if they have any issues.

“One issue is players may not want to be perceived as weak or having problems within a group of athletic, high testosterone, competitive individuals and I don’t think we always find out things going on behind the scenes.

“The Football Association hold meetings at the start of the year to offer information on the mental demands of football, social media, being in the limelight and the channels through which they can be reached and abused. There are initiatives and links from Mind charity so players are aware of how they can be helped.

“We don’t have massive staff resources so the players may not always see a physio, coach or fitness coach as someone to speak to. However, I tell the players they can talk to me about anything at any time and we have player/physio confidentiality. If they need direction or a club contact, I’m open to being that person.”

Speaking of social media, many footballers around the world will have their own channels. With that, there is always the chance players may get sent positive and negative messages. Clarke has advised footballers, if they can’t handle negative comments, they shouldn’t have social media channels.

“There are so many social media channels out there where people will voice their opinions, not particularly at you, but something you might come across. Everyone is entitled to their view and football is all about opinions.

“I wouldn’t put yourself on social media if you feel it will affect you and your game.”

While the perception of many is that all footballers earn the millions on offer to Premier League talent, the reality in League Two is that players have mortgages and bills the same as most people.

The average wage of a Walsall player last season in League One was £1,080 per week and, having suffered relegation to League Two since then, it’s likely that drop in divisions has hit many in the pocket1.

Clarke also revealed he has received messages from players who may be out of contract soon, or are worried about their financial situation due to the coronavirus outbreak. This has led to conversations with players at Walsall about these scenarios.

As well as Czuczman, Clarke, along with senior professionals have put themselves forward to help if anyone at the club is having any issues.

“I’d like to think that myself, Mat Sadler, Stuart Sinclair and the senior pros are approachable and if any player has any concerns or need’s someone to talk to, they can come to us. With the current situation, we have a big group chat where we discuss what’s happening and how we can go forward as a group.

“Sometimes it can help to listen to how they are feeling and reassure them. It’s all about knowing the person you are talking to, how they work and would react to what you have to say.

“Not just in football, every job has it’s own pressures. Whether you have to get your paperwork completed by a certain deadline or whether we need to win a game. It all comes down to pressure and how you cope with it.”

BHSF RISE is a tailored mental health and wellbeing service which provides unlimited, ongoing specialist support built around an individual’s specific needs. If you or anyone you know is struggling with their mental health, we’re here to help. Call us today on 0800 622 552 or email crt@bhsf.co.uk.